~Proudly Made in the Great USA~ 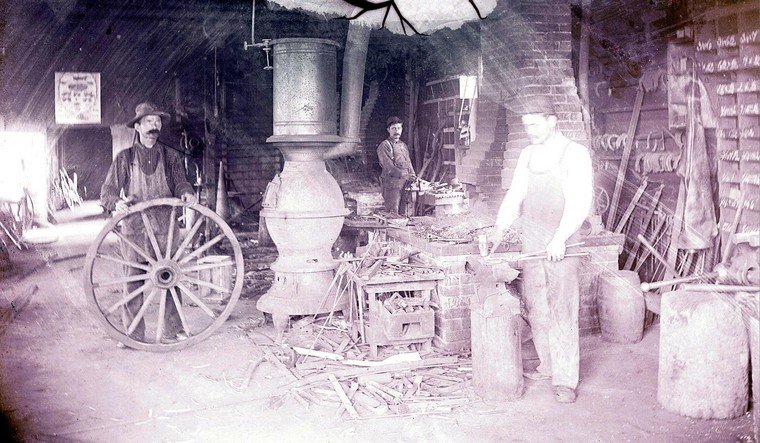 How Indy Hammered Knives Are Made

Indy Hammered Knives is a place where things are made with value, with our hands and the talent that God gave us. Each knife is hand crafted from start to finish…..from the forge to the grinder, each is hammered, shaped and the edge is ever so perfectly hand ground to reach the sharpest edge a knife can have. The handles are expertly shaped, of course, by hand bringing out the delicate and beautiful details of the material used that often times gets lost in mainstream manufacturing of knives. I will briefly cover some of the steps it took to make the knife you are currently holding.

The 10XX (1045, 1095) Steels - 1095 is the most common 10XX steel used for knife blades. Steel in the range 1045-1095 are used for knife blades, although 1050 is more commonly seen in swords. 1045 steel has less carbon (.45%), where 1095 has more (.95%), inversely 1095 has less manganese and 1045 has more. So in essence, 1095 steel would have more wear resistance, but would also be less tough. 1045 holds an okay edge, 1095 steel holds an edge great, and is easy to sharpen. The major drawback to this type of steel is that it rusts easily. Because of this issue, you will often see 1095 blades with some type of coating to combat rust. If you buy a knife with this type of blade, be sure to store it well and you should have no problem. High carbon steel also, due to its rich carbon content makes it multi purpose as a fire steel (to use with flint and steel). Dave Canterbury teaches the use of your primary tool (the knife) to be your reliable and effective way to start a fire in any situation with the use of real flint. The carbon is what actually spontaneously combusts with the “strike” of the flint and causes the spark which is generally about 800 degrees. 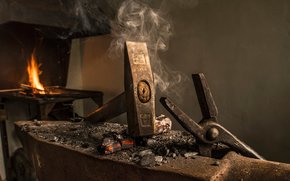 Forging is the process in which metal is shaped by hammering. Forging is different from machining in that material is not removed by it; rather the iron is hammered into shape. Even punching and cutting operations (except when trimming waste) by smiths will usually re-arrange metal around the hole, rather than drilling it out as swarf.

There are seven basic operations or techniques employed in forging: drawing down, shrinking (a type of upsetting), bending, upsetting, swageing, punching and forge welding. These operations generally employ hammer and anvil at a minimum, but smiths will also make use of other tools and techniques to accommodate odd-sized or repetitive jobs.

The "black" in "blacksmith" refers to the black fire scale, a layer of oxides that forms on the surface of the metal during heating. The origin of "smith" is debated, it may come from the old English word "smythe" meaning "to strike" or it may have originated from the Proto-German "smithaz" meaning "skilled worker."Who was the first blacksmith? Tubal-Cain is mentioned in the book of Genisis of the Bible as the original smith. In the medieval period, blacksmithing was considered part of the set of seven mechanical arts. The first blacksmith to arrive in Colonial America was a fellow by the name of James Reed, who promptly forged an iron chisel for each of his grateful Jamestown shipmates. Colonial blacksmiths rarely did any finishing or polishing of the charcoal blackened metal, which issued from the forge. Some did however, impress their initials or mark upon tools of which they were particularly proud. This "mark" is called the touchmark. 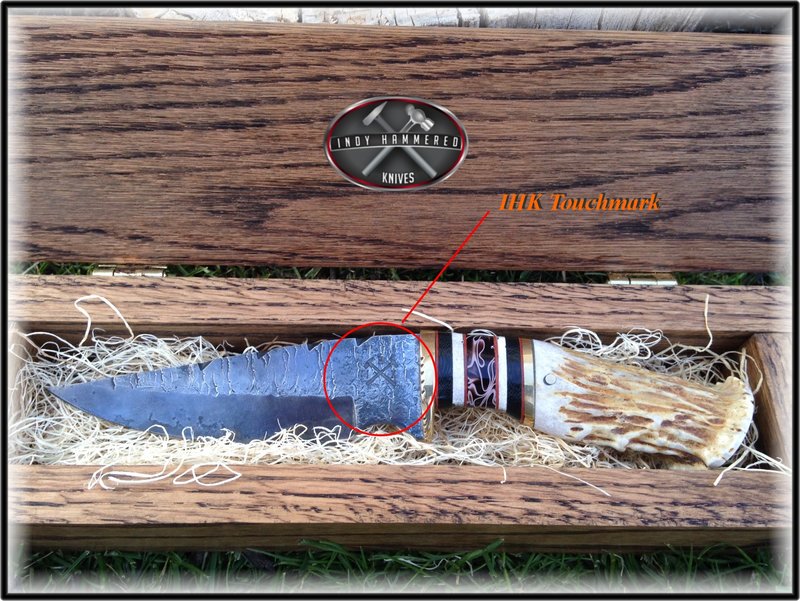 “Learning timeless skills like Blacksmithing are the keys to self-reliance. Throughout time the black smith was the most important staple of any village or settlement world wide” - Dave Canterbury.

The Quench: When heated to a certain point and cooled quickly, the steel becomes hard, brittle and full of stress; this is called the quench. This form of steel is known as “martensite.” Martensite, as it comes from the quenching process, is brittle, full of stress and unsuitable for a knife. If dropped on the floor at this point it would shatter like glass. Heating the martensite to a lower temperature will soften it, relieve the stress, and will result in a serviceable product. The low temperature treatment, usually between 375- 500 F, is called tempering, or drawing the temper.

Heat-treating: Civilization as we know it would not be possible if man had not learned how to utilize iron and steel to the high degree of which it is employed today. Steel is unique and useful because it can be treated so that it is extremely hard, springy or relatively soft. As knifemakers, we can utilize the extreme forms that steel can be heat-treated to for our advantage. The best example of this is a blade that has been either selectively hardened or selectively tempered. Such a blade can have an extremely hard edge, yet withstand a 90-degree ﬂex test. This is possible because the edge is hard, the center section of the blade is spring tempered and the back is relatively soft. (this process is a little more complicated and would require some hands on demonstration and trade secrets!!!). So, this is how the steel in your hand became a knife that is virtually unbreakable, holds an extremely sharp edge and has beautiful hammer marks that makes it unmistakably unique. (The snake skinned hammer mark is from my most prized hammer that I “dressed” specifically for these knives) 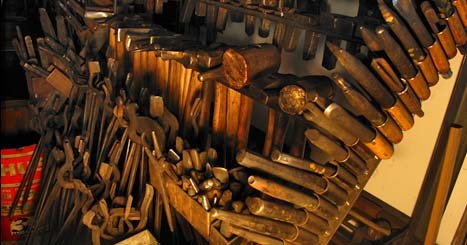 As my mentor (Jeff White) told me......"If I gave you some soft clay could you make a knife (design) with your hands? Then you can make a blade out of hot steel and a hammer".

I will be offering knife making classes where you can spend about the same amount of money as purchasing one of my knives and leave with your own hand made knife to pass on to your generations, as soon as I secure a smithy worthy of hosting prospective student steel artisans with the desire to learn a world craft. 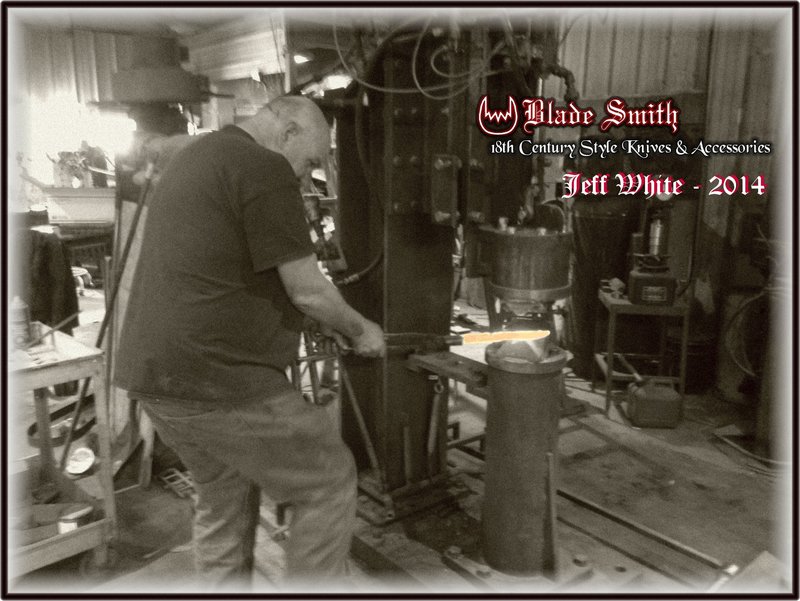